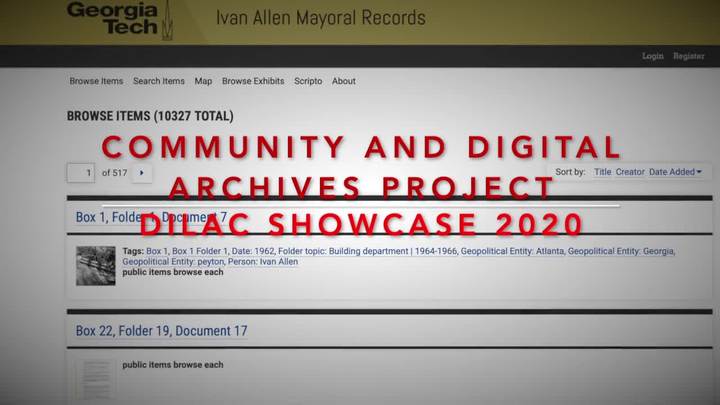 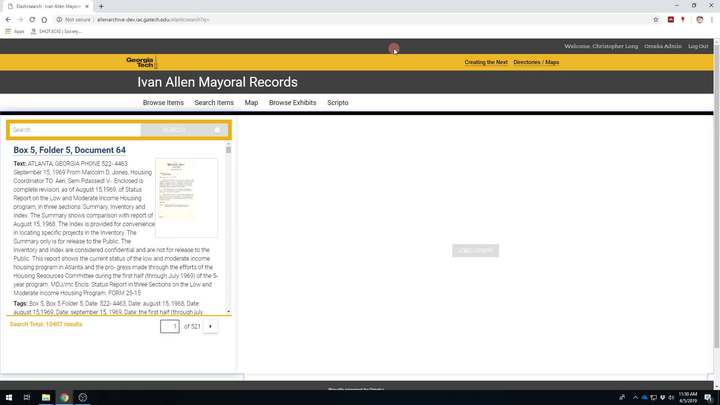 The Mayor Ivan Allen Digital Archive, initiated in 2016, consists of some 30,000 pages of Atlanta’s famous 1960s mayor’s administrative records, paired with a custom-built user interface that incorporates machine learning to enable users to more easily parse large numbers of search results and find the granular information they seek.  From the project’s beginning, our intention has been to move beyond mere digitization of the physical papers, “opening up” or “exploding” the archive by developing a user interface that can aggregate, categorize, and interrelate the information in new and innovative ways.  We began this process with a team of Junior Computer Science majors in the 2017-18 academic year, producing a working prototype, and since early 2019 have led a VIP (Vertically Integrated Project) to continue refining the interface – which by now has the capability to visualize connections between named entities (individuals, organizations, and places as well as dates) within the digitized corpus of Allen’s mayoral records.  We also have an NEH Digital Humanities Advancement grant, running through early 2022, to develop the interface into a general-use, multimedia digital archive tool.

In the interest of showcasing and refining our work, this past November we hosted a one-day workshop with DILAC funding for community, student, and academic researchers interested in learning about and exploring the Mayor Ivan Allen Digital Archive.  In doing so, we sought to fulfill our original stated goal of building a networked, digital archive that could enable diverse stakeholders to pursue more open-ended interpretive experiences, thereby potentially enhancing the quality and relevance of humanistic historical education, as well as empowering civic participation.  Through the workshop’s supervised setting, participants explored, formulated, and tested their own hypotheses about how and why particular decisions were made by Atlanta’s political leaders in the 1960s, yielding a far richer understanding of this complex history.  At the same time, we the developers got the valuable opportunity not only to see the results of our work, but also to conduct a detailed survey which is currently being used to refine the search interface according to user needs.